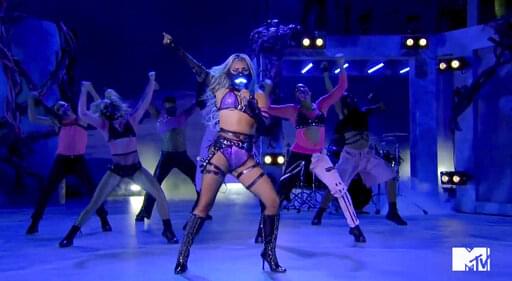 Lady Gaga was the big winner at the 2020 MTV VMAs with five awards, including Song of the Year and Best Collaboration for her song “Rain On Me” with Ariana Grande.  She also gave us a 9 minute performance, which included Ariana and a medley of songs off her latest album, “Chromatica.”

.@ladygaga took us on a JOURNEY through #CHROMATICA with this incredible #VMA performance! 💖 pic.twitter.com/jBjaUpZtfG

How inspirational was @ladygaga‘s Tricon Award acceptance speech?! We are still in awe! #VMAs pic.twitter.com/XKoDxSJiEs

The Weeknd won the coveted Video of the Year for “Blinding Lights,” and “Say So” singer Doja Cat won Best New Artist.

.@DojaCat‘s #VMA performance was OUT OF THIS WORLD, if I do ~say so~ myself. 💫 pic.twitter.com/guxE0ARXCp

Taylor Swift made history, as she does, for being the first ever artist to win the award for Best Direction for her music video for “The Man.”

Keke Palmer hosted the socially distant awards show with multiple celebrity presenters, and the show was dedicated in memory of “Black Panther” star Chadwick Boseman, who passed away from colon cancer at just 43 years old.

The world needs more superheroes, and we all deserve to see ourselves in them. Chadwick Boseman helped make that happen. Rest in power. pic.twitter.com/d05kkkQR6b