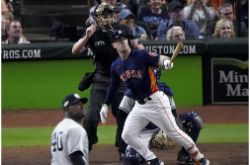 HOUSTON (AP) — Alex Bregman, Framber Valdez and the Houston Astros are off to a perfect start this postseason.

Taking the formula that won them 106 games in the regular season — strong pitching and hitting home runs — the Astros kept rolling against the New York Yankees.

Bregman connected for an early three-run homer, Valdez threw seven strong innings and the Astros edged the Yankees 3-2 Thursday night to take a 2-0 lead in the AL Championship Series.

The Astros improved to 5-0 this postseason after a sweep to begin this best-of-seven matchup.

“We got a few guys hot. We would like to get everybody hot before it’s over with,” Astros manager Dusty Baker said.

Yankees slugger Aaron Judge just missed a two-run homer in the eighth when his drive was caught just in front of the short wall by right fielder Kyle Tucker. The ball would’ve landed in the short right-field porch at Yankee Stadium, Statcast showed — with the roof open at Minute Maid Park, the wind might’ve knocked down Judge’s bid.

“I think the roof open kind of killed us,” Yankees manager Aaron Boone said, later adding, “I didn’t think like he smoked it like no-doubter, but it felt like his homers to right.

A night after Justin Verlander fanned 11 in a 4-2 win in Game 1, Valdez turned in another solid pitching performance and Bregman’s third-inning homer was all the offense Houston needed.