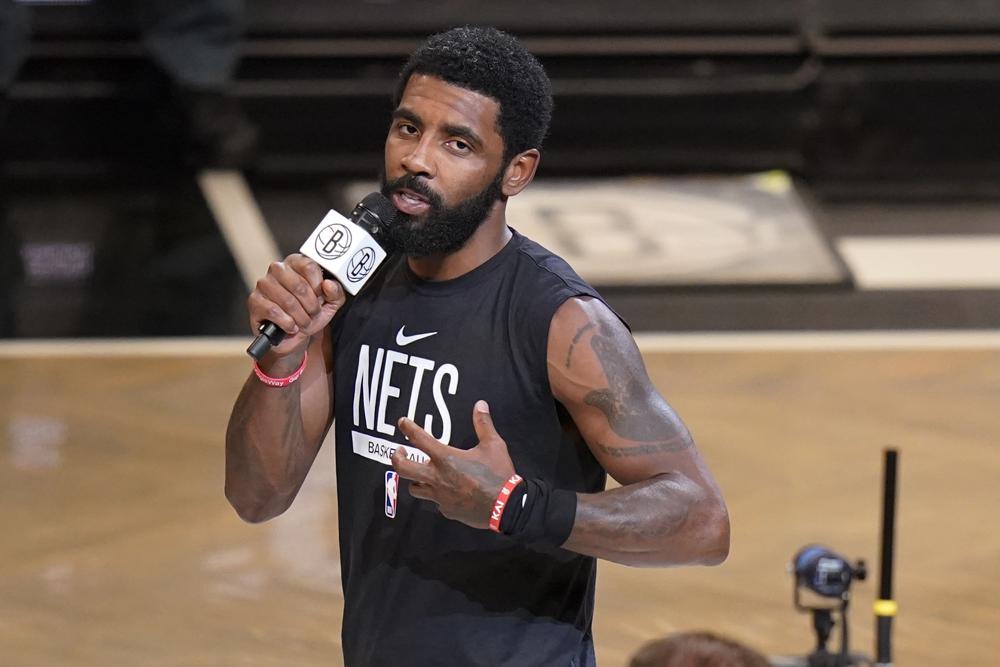 NEW YORK (AP) — The Brooklyn Nets suspended Kyrie Irving for at least five games without pay Thursday, dismayed by his repeated failure to “unequivocally say he has no antisemitic beliefs.”

Hours after Irving refused to issue the apology that NBA Commissioner Adam Silver sought for posting a link to an antisemitic work on his Twitter feed, the Nets said that Irving is “currently unfit to be associated with the Brooklyn Nets.”

“We were dismayed today, when given an opportunity in a media session, that Kyrie refused to unequivocally say he has no antisemitic beliefs, nor acknowledge specific hateful material in the film. This was not the first time he had the opportunity — but failed — to clarify,” the Nets said in a statement.

“Such failure to disavow antisemitism when given a clear opportunity to do so is deeply disturbing, is against the values of our organization, and constitutes conduct detrimental to the team. Accordingly, we are of the view that he is currently unfit to be associated with the Brooklyn Nets.”

Irving did finally apologize later in an Instagram post for not explaining the specific beliefs he agreed and disagreed with when he posted the documentary.

“To All Jewish families and Communities that are hurt and affected from my post, I am deeply sorry to have caused you pain, and I apologize,” Irving wrote. “I initially reacted out of emotion to being unjustly labeled Anti-Semitic, instead of focusing on the healing process of my Jewish Brothers and Sisters that were hurt from the hateful remarks made in the Documentary.”
His reluctance to do so earlier Thursday came hours before the FBI said it had received credible information about a “broad” threat to synagogues in New Jersey, Irving’s home state.

The Nets said they made multiple attempts in recent days to help Irving understand the harm and danger of his words and actions, but it was clear during the point guard’s interview after practice earlier Thursday that little had changed.

Irving would say only that he meant no harm. He said some things in “Hebrews to Negroes: Wake Up Black America” were untrue, but he didn’t say he shouldn’t have posted a link to it.

“I’m not the one who made the documentary,” Irving said.

He was later asked if he had antisemitic beliefs, and he didn’t say no.

“I cannot be antisemitic if I know where I come from,” Irving said.

Anti-Defamation League CEO Jonathan Greenblatt reacted to a video of Irving’s response to that question on Twitter by writing: “The answer to the question ‘Do you have any antisemitic beliefs’ is always “NO” without equivocation.

“We took @KyrieIrving at his word when he said he took responsibility, but today he did not make good on that promise,” Greenblatt added. “Kyrie clearly has a lot of work to do.”

A day earlier, Irving and the Nets had announced, in conjunction with the ADL, that each would be donating $500,000 to anti-hate causes. Greenblatt tweeted Thursday night that his organization could not in good conscience accept Irving’s donation.

“While we appreciate the fact that he agreed to work with the Brooklyn Nets and the Anti-Defamation League to combat antisemitism and other forms of discrimination, I am disappointed that he has not offered an unqualified apology and more specifically denounced the vile and harmful content contained in the film he chose to publicize,” the commissioner said.

Silver added that he will be meeting with Irving in person within the next week.

It’s the second straight season that the Nets have sent Irving away from the team. Last year it was when he refused to be vaccinated against COVID-19, making him ineligible to play home games. They didn’t want him to be a part-time player, though eventually brought him back to play road games in December.

Irving posted the since-deleted link late last week, then defiantly defended his right to do so after the Nets’ home loss to Indiana on Saturday. The team had him not speak to reporters after their two games this week, hoping to avoid further upsetting fans, but the time away didn’t change Irving’s stance.

He quickly grew defensive Thursday, asking reporters why they weren’t asking questions about the history of Blacks in America, saying 300 million of his ancestors are buried in the country.

“Where were you guys asking those same questions when I was a kid learning about the traumatic events of my familial history and what I’m proud to come from and proud to stand here,” Irving said, “and why when I repeat myself that I’m not going to stand down, it has nothing to do with dismissing any other race or group people.

“I’m just proud of my heritage and what we’ve been through and the fact that this has pinned me against the Jewish community and I’m here answering questions of whether or not I’m sorry or not about something I didn’t create and was something I shared, and I’m telling everybody I’m taking responsibility, than that’s where I sit.”

Irving was also asked specifically about his beliefs regarding the Holocaust.

“Those falsehoods are unfortunate,” Irving said, referring to content in the film. “And it’s not that I don’t believe in the Holocaust. I never said that. Never, ever have said it. It’s not come out of my mouth. I never tweeted it. I never liked anything like it. So the Holocaust in itself is an event that means something to a large group of people that suffered something that could have been avoided.”

The Nets said Irving’s suspension would last “until he satisfies a series of objective remedial measures that address the harmful impact of his conduct.”

The team refused to give him a contract extension this summer after he was unavailable for so much of last season. Irving opted into the final season of his contract, making it possible he is in the final season with the team.

The Nets are off to a 2-6 start, costing coach Steve Nash his job Tuesday.

FILE – Brooklyn Nets’ Kyrie Irving speaks before the team’s NBA basketball game against the New Orleans Pelicans, Wednesday, Oct. 19, 2022, in New York. NBA Commissioner Adam Silver wants an apology and Kyrie Irving still isn’t going to give one. Shortly after the NBA Commissioner said Irving “made a reckless decision” by tweeting out a link to a film containing antisemitic material last week, the Brooklyn Nets guard again stopped short of saying he was sorry for doing so. (AP Photo/Frank Franklin II, File)