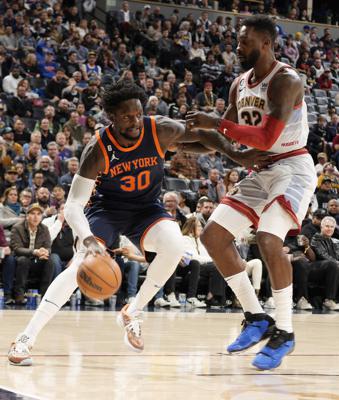 DENVER (AP) — Julius Randle scored a season-high 34 points and the New York Knicks took advantage of Nikola Jokic’s absence to win in Denver for the first time in 16 years, rallying past the Nuggets 106-103 on Wednesday night.

As Randle coughed in the locker room with a bug that’s going through the team, Brunson was asked the key to the comeback.

“Julius Randle and Julius Randle,” Brunson said of the forward who also came up with a diving steal and feed to Brunson for a dunk in New York’s frantic finish. “When Julius is doing that, it’s big-time and we all feed off that.”

The Knicks, who allowed 145 points to Oklahoma City at home Sunday, handed a team its first home loss for the second straight night after winning in Utah on Tuesday. Denver’s loss left the NBA with no unbeaten teams at home.