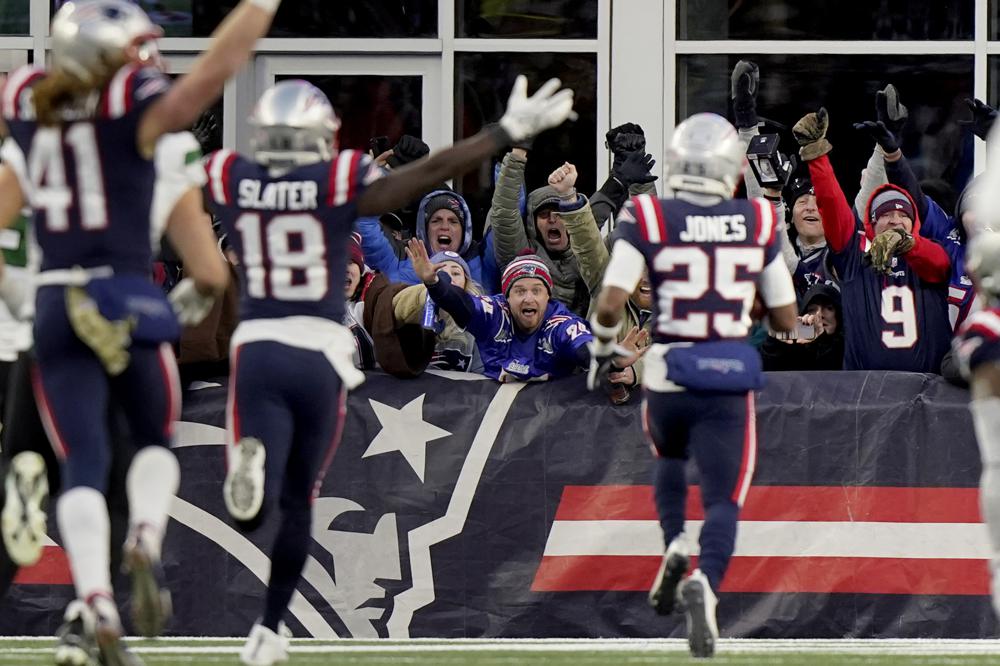 The rookie’s score was the first TD on a punt return in the NFL this season. It was also the lone TD of the game and broke a stalemate on a day when both offenses struggled to move the ball.

It was the third straight win for the Patriots (6-4) and their 14th straight over New York. They also denied the Jets (6-4) a chance to move into first place in the AFC East this late in the season for the first time since 2010. Instead, New York dropped to last place.

The Jets haven’t won in Foxborough since the 2010 playoffs when they knocked out the Patriots in the divisional round.

The Patriots moved the ball well at times, with Mac Jones completing 23 of 27 passes for 246 yards. But they were only 4 of 15 on third down and had only one field goal — with Nick Folk missing two attempts — despite getting inside the Jets 30 three times.

Back-to-back plays involving Denzel Mims and Jonathan Jones kept the Jets alive late in the fourth.
First, Jones dived in front of Mims and dropped a near interception along the sideline. Then, Mims was called for defensive holding, negating what would have been a sack on Wilson.

But New York couldn’t move the ball with their new set of downs and were forced to punt three plays later.

It was a rough kicking day overall for New England, with a usually dependable Folk bouncing a 44-yard attempt off the crossbar in the second quarter, and going wide left from 43 yards early in the third.

Folk kicked without his usual holder, after punter Jake Bailey was placed on injured reserve Saturday with a back issue. Veteran punter Michael Palardy replaced him.

Field goals by both teams provided all the scoring until the winning punt return.

The Patriots drove to the Jets 6 before settling for a 24-yarder by Folk.

Wilson completed a 34-yard pass to Mims to set the Jets up on the Patriots 25. It stalled there, leading to a 45-yard field goal by Greg Zuerlein.to

The Patriots had a chance to add more points late in the second quarter, driving the Jets 7. But a holding penalty on Yodny Cajuste, followed by a sack on Jones pushed the ball back to the 26. The series ended with Folk’s miss from 44.

Kickoff was delayed 10 minutes by what was announced as “technical difficulties” to a groaning Gillette Stadium crowd. The game began with only a single camera angle on the CBS television broadcast, with limited replay capacity.

The issue was cleared up after the Jets’ first offensive series.

Patriots linebacker Matt Judon combined with Mack Wilson for a sack early in the third quarter and dropped Zach Wilson for a 9-yard sack on the first play of the fourth quarter to set a career high of 13 1/2 this season.

Patriots: At Minnesota Vikings on Thanksgiving.

New England Patriots fans celebrate as cornerback Marcus Jones (25) scores on a punt return during the final minute of the second half of an NFL football game against the New York Jets, Sunday, Nov. 20, 2022, in Foxborough, Mass. The Patriots won 10-3. (AP Photo/Steven Senne)